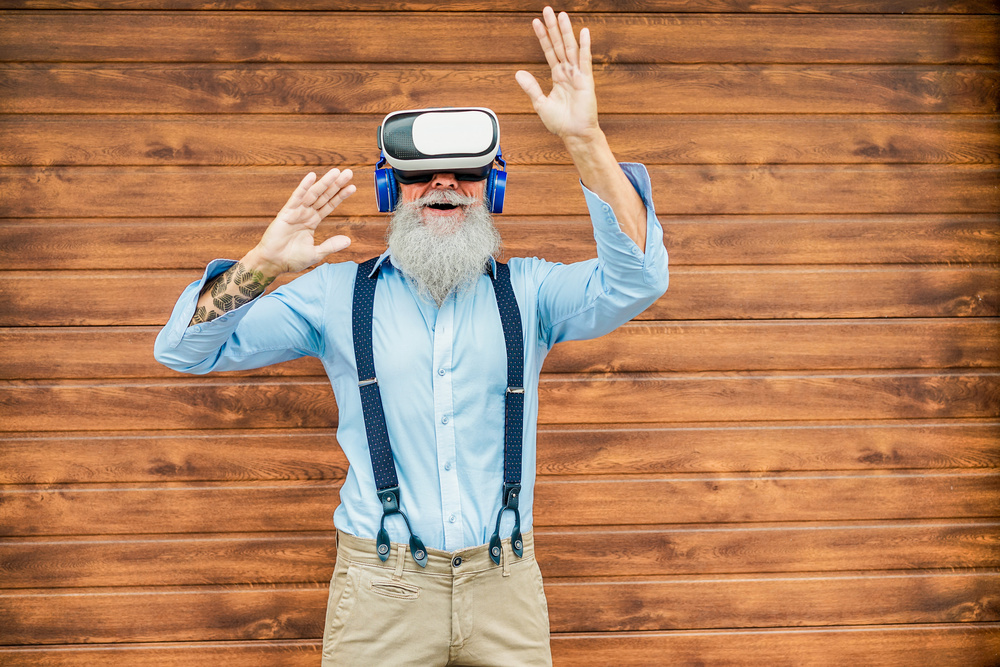 It’s usually young people who are associated with cutting-edge technology, and for that reason we had never really thought about looking into the benefits of mixed reality for the elderly. That is, until recently, when we started a very special project to find out what positive impacts this immersive technology can have for seniors. Let’s dive in and see how we examined their experiences.

We have discussed numerous interesting project ideas in the past year, since we started to pursue extended reality technologies more actively at BE-terna. We have spoken to companies from the automotive, retail, and manufacturing industries, but were really surprised about one in particular. After one of our conference talks, an innovative young manager approached us with an idea of trying out these technologies in care homes and nursing homes for elderly people.

He took our statement that mixed reality is applicable to any field literally, and he laid down a challenge for us. He invited us to help him with implementing these ideas into the lives of nursing home residents, and so we started a project.

VR and AR have positive impacts on seniors

The project looked tricky to begin with. We would have to offer high tech, modern devices, originally developed for NASA and fighter pilot training, to older people, some of whom had never used a mouse or a keyboard before. What would the benefits be for them and for us? When we started our Centre of Excellence (COE) group, we decided that we would listen to any idea and try to find technology that would bring the most added value to the client. So, we did a bit of research and it turned out there are many possible positive results. These benefits include stimulating memory, learning about new stuff, all sorts of training, making people happier and better connected, etc.

After the initial on-site visits, discussions, interviews and brainstorming about the best ways to collaborate, we decided to approach the solution in small steps. A long-term goal of an all-round solution was envisioned, but we started out with small tests. It needs to be understood that there was no test environment deployed or any old backups to fall back on if we made a wrong decision. Some would even say that we were dealing with the most demanding of end customers. Extended reality tech, mixed reality in short, enables numerous means of use. VR has specific benefits, then AR is best in other use cases, and then mixed reality is again something special. The user could be anyone from a passive viewer, to someone who can manipulate their virtual environments, being able to walk around these environments, use speech and real world hand gestures for commands.

We tested a few interesting ideas with the experts from the nursing home and decided on a fairly simple virtual reality (VR) test for the residents that would last for a few months. The goal was to make the introduction as comfortable and easy as possible. Our initial ideas were to place the residents into environments that they are unable to experience anymore. Therefore, we placed them in interesting natural scenes featuring animals and even cultural heritage spots, and all this allowed them to speak about things they saw, the feelings they had and generally got them interested in the themes. Where possible, they were shown videos from places they knew well, or had already visited. There were some who liked this and others who didn’t, but everyone was touched and moved by the experience.

The total immersion and interaction that VR can offer to seniors

This is a long-term project. With ups and downs expected and with no defined results, we are often faced with surprises in the most unusual places. For us, as a modern IT company, it is important to recognise that there can be unexpected opportunities in making people’s lives better everywhere. This project has inspired colleagues, who were not originally part of it, to connect and share new ideas.

Just as an example, our artificial intelligence department would like to develop a system that would customise each user’s experience based on what that person likes, to create new virtual worlds and colour them as the user likes, and would also encourage the user to perform movements i.e. to actually do physical exercises designed specifically for that person.

We are looking forward to possible future iterations of the project with Microsoft Hololens2 devices. It would be interesting to see people’s responses to holographic content. We would assume that, if done properly, these devices could open up unlimited possibilities for elderly people. Everyone would be able to gain valuable insights into how technical things work, they would be able to create beautiful works of art, play chess remotely with relatives around the world, and take part in hundreds of other as-yet unimagined activities that this tech can offer. We are happy to have had the chance to be involved in this collaboration, and we hope for further future development. We gladly invite anyone with ideas about the implementation of mixed reality in their business to reach out and contact us.

Insurance Cloud Solutions are imperative for the Insurance industry

Infobip: The global leader in omnichannel engagement that is changing interaction with customers in marketing, sales and customer support